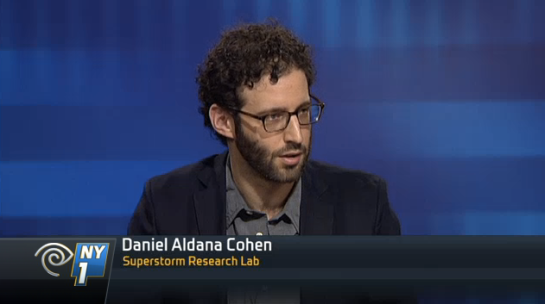 Last Friday evening I had the privilege of going on New York 1 to talk about the Tale of Two Sandys report that the Superstorm Research Lab, of which I’m a founding member, released nearly a year ago. You can watch the whole in-depth interview here.

Hurricane Sandy’s two-year anniversary is coming up this month, and NY1 is ramping up its coverage. In the interview, I talked about our finding, based on nearly 80 interviews, that the storm was really experienced in two different ways by different groups of New Yorkers—as a short-term interruption of the status quo from above; and as an exacerbation of long-running social and economic insecurities from below.

I also said that Mayor De Blasio’s administration had in a lot of ways adopted the second Sandy perspective, focusing on long-term economic and social insecurities as he works with community based organizations which helped get him elected, and which continue to pressure him. These groups are happy with a lot of the changes made to the recovery process under De Blasio. But as I said on the show, one area where they are warning that more work is needed, is in providing adequate aid to renters. If there is another Sandy this fall, we still won’t be able to track displaced renters with any accuracy—never mind providing them with the relief that they need.

Note that SRL member Alexis Merdjanoff actually spotlighted the issue of tenants’ particular vulnerability on a blog post many months ago.

Indeed, although it was my pale, anxious face on screen, the the Tale of Two Sandys report was written collectively by Erin Bergren, Jess Coffey, Ned Crowley, Liz Koslov, Max Liboirox, Alexis Merdjanoff, Adam Murphree, David Wachsmuth, and me. Plus research from Michael Gould-Wartofsky, Lisa Ng, and Shelly Ronen. And Melissa McCrumb of Make the Road New York New York and Susannah Dyen of ALIGN NY brought me up to speed on some key recent developments. Just like Hillary Clinton says, It takes a village!